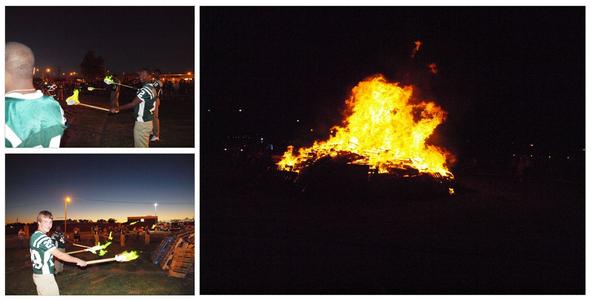 The weather could not have cooperated more the night of Friday, October 15th, 2004, when the Alumni Association sponsored the Third Annual Homecoming Bonfire and Pep Rally on the Archbishop Shaw campus. The event was the night before the Homecoming game against the Jesuit Blue Jays.

This year's event was the most successful since the alumni Association brought back the annual tradition three years ago. For too many years the bonfire was absent from the Shaw campus, but thanks to the memory of the good time some of the older Alumni Association members remember having at the event when they were Shaw students, they felt it was time that it was brought back.

Over the last three years it has grown each and every year, with more students, families, teachers, administrators, and alumnus attending. Members of the first Shaw graduating classes (1966, 67, 68, and 69) were well represented this year.

Everyone was entertained thanks to the DJ'ing provided by Steven Marque (Class of 1996), the Shaw Marching Band, the National Champion Shaw Cheerleaders, Eagelette Dance Team, and the Shaw Pep Squad. Prior to the lighting of the Bonfire the senior members of the Eagle football team, as well as the staring line-up were individually introduced as they ran into the circle of motivated and cheering fans. Highly charged talks by head coach Scott Bainsfather and the team captains raised the crowd to a higher frenzy.

Then it was time, as the new tradition started three years ago, took place. The senior members of the football team, playing in their last homecoming game, encircled the huge mountain of wooded pallets. Each of them were handed a blazing torch, and together they simultaneously set it afire. Within minutes the fans that were all around the wooded structure began taking steps backward as the heat from the huge inferno grew more and more intense. The whole night sky lit as the cinders rose higher and higher symbolizing the rising spirit of all who attended.

As the fire burned and everyone stood in joy, they slowly wondered over to enjoy themselves with refreshments of hamburgers, hot dogs and soft drinks.

Without a doubt every one who attended had a great time. Its great to have the old "tradition" back.

Make sure you plan on attending next year's event the night before the homecoming game. You won't be sorry.

If you would like to assist with future bonfires please contact the Alumni Association. Any and all help is welcome.