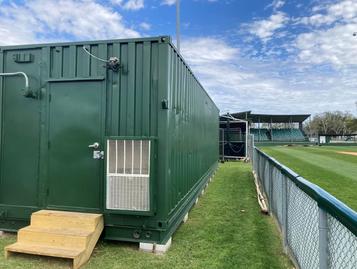 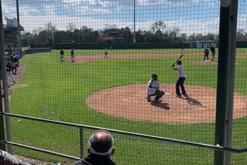 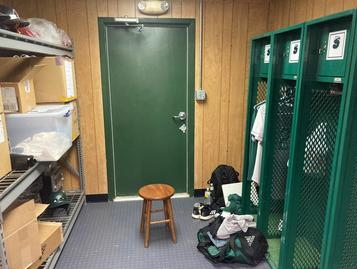 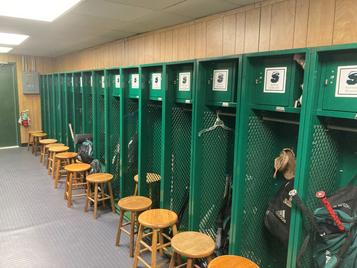 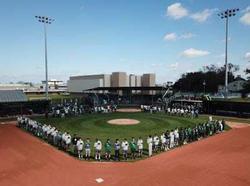 More than three dozen former Eagle baseball players flashed their old diamond brilliance and stretched their aging muscles at the 2020 Alumni Baseball Game sponsored by the Talon Club at Father Leo Winterscheidt Stadium on the Shaw campus on Saturday February 1st. An estimated 300 students, alumni, fans and supporters witnessed former Eagle stars from odd-numbered graduating years squeak out a victory over an equally star-studded team comprised of graduates of even-numbered class years. The score was 15-0.

Following prayer and an invocation by Shaw Director Father Lou Molinelli and the singing of the National Anthem, the shout of “play ball” was heard from the booming voice of celebrity umpire Tommy Connors Sr., father of current Eagles football coach Tommy Connors Jr. In the introduction of one of the best remembered players, fans heard the field announcer say over the loudspeaker, “Perhaps the odd-numbered team enjoys a slight advantage on the mound,” referring to starting right-handed pitcher J.P. France ‘13, a former Tulane and Mississippi State University hurler, now working his way up the Houston Astros farm system. One hitter left frozen at the plate by a France fastball was heard to say, “That sounded like a strike.” Other alums enjoyed greater success at the plate. Jarrett Falcon ‘04, now a lawyer, told one fan: “Did you see that single I got? That just about doubles my entire hit production while I played at Shaw.” See a full roster of the names of all ex-Eagles participating in the game below.

SOAR WITH THE TALON CLUB

The Talon Club is a group of Eagle alumni baseball players, fans and friends of America’s past-time who support the Shaw baseball team through fundraising, family-friendly events and Christian brotherhood camaraderie, all designed to pump money and enthusiasm into making the Shaw baseball program the finest in the Catholic League. Coordinated by Jeff Langford ‘94 and Ryan Duver ‘98 and working closely with the parents’ baseball boosters group, the Diamond Club and its President Paul Smith, the Talon Club hosts baseball game tailgating, the annual Alumni Baseball Game and family fun events of all kinds, featuring food, drink and hot stove talk. Through its activities, the club hopes to attract and welcome baseball playing youngsters and other prospective students in the West Bank community to our campus and facilities so that they can feel and enjoy the welcoming and fun atmosphere of Eagle baseball. The club is particularly enthused by the return to Shaw of Coach Doug Faust for the 2020 season after a seven-year stint as head coach at Loyola University. Coach Faust’s previous Shaw baseball tenure from 2008 to 2012 produced the 2008 State Runner-up trophy, two district championships, five playoff appearances and an overall 98-68-3 record.

Fans and supporters enjoyed not only the play on the field but also jambalaya, hot dogs, hamburgers, baked beans, fried fish, shrimp and frog’s legs, soft drinks and cold beer for those over 21. Baseball team apparel and other memorabilia were available for purchase. Strikes, balls, hits, runs, outs, walks, putouts (and perhaps an error or two) were recorded by the players. But the most important things achieved at the game were the intangibles of nostalgia, brotherhood and feeling young again in the warm, safe and friendly confines of the Shaw campus and baseball facility. 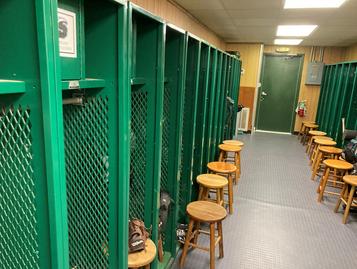 All funds raised by and donated to the Talon Club flow through the club’s separately designated component of the Archbishop Shaw High School Alumni Association, Inc. 501(c)(3) at the Homebank branch in Harvey LA. The account will direct funds directly to the Archbishop Shaw High School baseball program for capital projects and improvements in whatever ways our coach sees fit. Short-term goals include moving the outfield fence to the coach’s specifications, installing a “Green Monster” centerfield wall and building a separate locker room and clubhouse for the team. Ambitious long-term goals include construction of a state-of-the-art baseball complex down the rightfield line, development of an Eagle Vision Sports streaming service produced entirely by students and establishment of a self-sufficient program-financed endowment for student scholarships and future support of the program.

JOIN US through your direct donations or by participating in any of our
activities. Contact Jeff at Jefflangfor@gmail.com or Ryan at ryand@cppumps.com 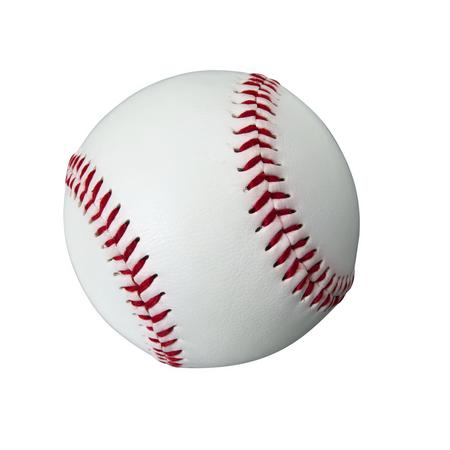 A new locker room for exclusive use by the Eagle baseball team has been constructed and donated to Shaw by the alumni Talon Club, working in conjunction with the parents and friends booster group, the Eagle Diamond Club. The locker room, freshly painted in Eagle green, has been placed down the on-campus baseball stadium right field line. It sits between the field fence and the batting practice facility, and is being used by the team starting with the 2022 season.

“It’s great,” said baseball coach Doug Faust. “Before this, there was nowhere like it on campus that was just for the baseball team.”

The new locker room has been in the works by the Talon Club for two years. It was put in place solely through donations of equipment, materials, time, volunteer labor and cash solicited and obtained by the Talon Club, with no expenditures from Shaw’s general fund.

“We’re very proud of this accomplishment,” said the Talon Club’s Jeff Langford, Class of ’94. “All totaled, alumni and friends have put about $15,000 in donated materials and financial contributions into this project.” The new locker room will be on display for players, alumni and spectators at the annual Alumni Baseball Game, now scheduled for Saturday, April 9, 2022 at 1:00 p.m.

The locker room’s basic structure is a ten-feet wide, eighty-feet long,  twelve-feet high galvanized steel former industrial storage container that was donated for the project by a generous anonymous major donor. In October 2021, that same anonymous donor provided an on-site construction crane that lifted the container into place on a raised cinder block foundation and site prepared by volunteers. That same anonymous donor then transformed the container into a comfortable baseball locker room, by providing labor, paint, wall paneling, ceiling materials, flooring and other finishing touches. Electrical wiring for interior lighting and central air-conditioning and heating was installed by Paul Smith of the Eagle Diamond Club, with help from other volunteers. An interior wall and doorway were built so that the players area is separate from the connected coaches’ room. Cash donations were used to purchase 31 individual athletic lockers, which were assembled and installed by volunteers and the baseball coaches earlier this year.

Each player and coach has his own locker space. Players’ names are printed on a white square magnetic sign sporting the Shaw green “S” logo above his locker. “When a senior player graduates, we will give him his locker name plate sign to take with him as a memory of his Shaw baseball playing days,” Coach Faust said.

The new locker room is used by both the varsity and junior varsity baseball teams. “It’s a place for team-building, where our players can form a community,” Coach Faust said with gratitude for this new improvement to the baseball program’s beautiful on-campus facilities. “When they’re not on the field, they can sit in here, get ready to play, listen to their music and just socialize and talk to each other. All the guys love it, but this year’s seniors especially appreciate it.”

Langford praised the response to the request for donations to make the project possible. “It was amazing,” he said. “ We had donors who attended and played baseball at Shaw, but we also had a contributor who did not attend Shaw but played for Coach Faust at Hannan High School or Loyola.” That ex-Faust player and donor was Brad Showalter. Other cash contributors to the project included Jarrett Falcon ’04, Chris Fernandez ’95, Dallas Chaisson ’98, B.J. Giles ’98, Jay Wilkinson ’73 and Lance Ehret ‘89.

Coach Faust was particularly pleased by the new locker room because it enhances his players’ enjoyment of the high school baseball experience. “I tell my guys all the time to look around, enjoy themselves and have fun. What they are experiencing is the reason there are so many men’s softball teams and leagues around. I tell them those older guys wish they could still do what you guys are getting to do here now at Shaw.”